Liberty Fund was founded in 1960 by Pierre F. Goodrich, an Indianapolis lawyer and businessman, to the end that some hopeful contribution may be made to the preservation, restoration, and development of individual liberty through investigation, research, and educational activity. 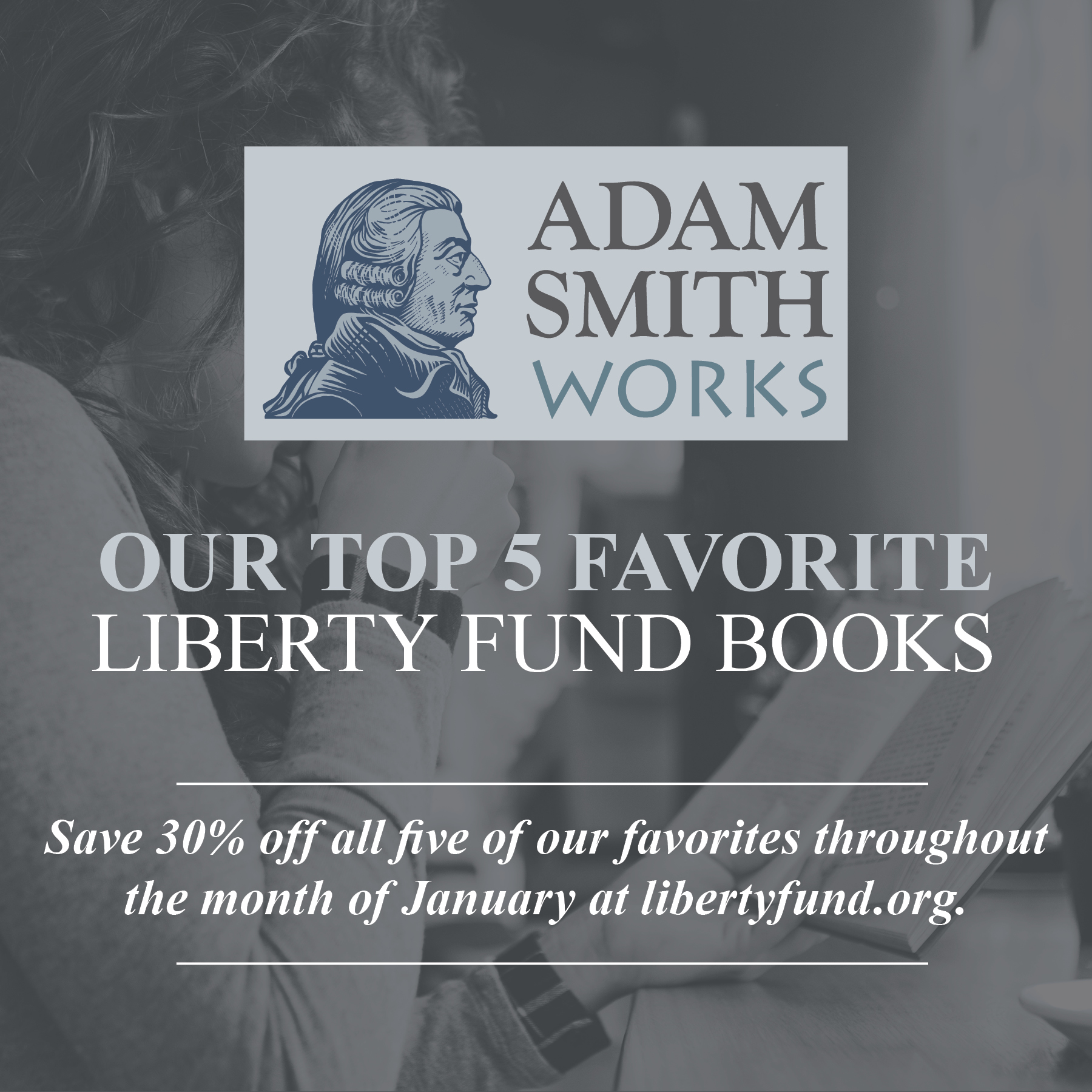 What else should you be reading if you love Adam Smith? AdamSmithWorks has just the list! Save 30% off all five of their favorite titles throughout the month of January and receive a free gift with purchase of Adam Smith, The Man and His Works with Promo Code ASWFavs.

Great books are the repository of knowledge and experience. Liberty Fund seeks to preserve the wisdom and learning of the ages and to strengthen our understanding and appreciation of individual liberty and responsibility.

For over four decades, Liberty Fund has made available some of the finest books in history, politics, philosophy, law, education, and economics—books of enduring value that have helped to shape ideas and events in man’s quest for liberty, order, and justice.

By Michael Oakeshott
Foreword and Introduction by Timothy Fuller

By 1989, when Michael Oakeshott’s Voice of Liberal Learning was first published by Yale University Press, books that held a negative view of education in the United States had garnered a remarkable amount of attention. 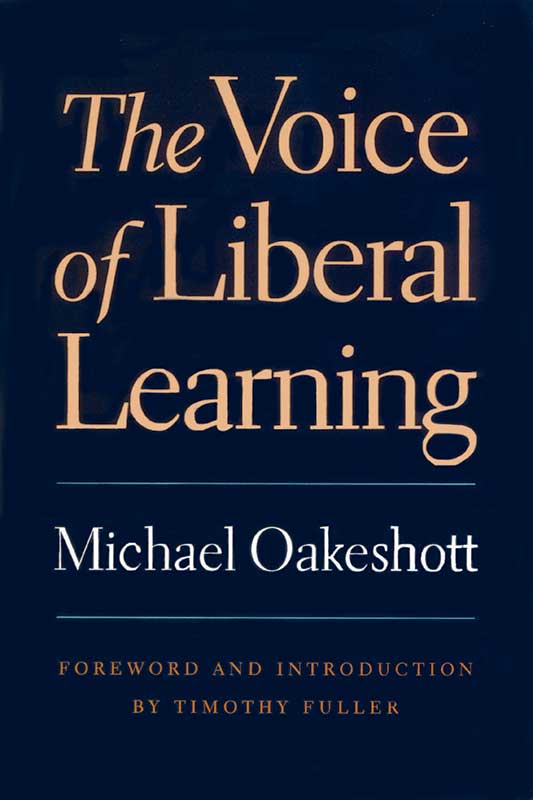 These resources are designed to further Liberty Fund’s educational activities. They include classic works in the tradition of limited government, as well as lively current discussions of how classical-liberal principles apply in today’s world. 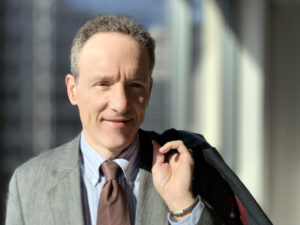 Economist and author Daniel Klein of George Mason University talks about the ethics of working and the potential for our working lives to make the world a better place. This is a wide-ranging conversation that includes discussion of Adam Smith, what jobs we should work on, what charities we should donate to, how we can […]

Is the story of WeWork now typical or emblematic of—or even necessitated by—our current economic system?

Postell and O'Neill have produced a volume that perpetuates the unfortunate “Wall Street vs. Main Street” divide in American conservatism.

The Truth About Income Inequality

On a global scale, inequality is declining. While it has increased within the United States, it has not grown nearly as much as people often claim. The American poor and middle class have been gaining ground, and the much-touted disappearance of the middle class has happened mainly because the ranks of the people above the middle class have swollen. And while substantially raising tax rates on higher-income people is often touted as a fix for inequality, it would probably hurt lower-income people as well as the wealthy. The same goes for a tax on wealth.

These are two of the opening paragraphs of my article “The Truth About Income Inequality,” Reason, February 2020.

Molinari appeals to socialists to join him in marching down "the broad, well-trodden highway of liberty" (1848) 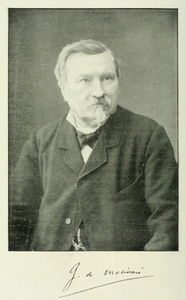 As President Trump’s impeachment trial plays out in the U.S. Senate, it’s striking that such a grave situation has resulted from such a trivial cause. By that I don’t mean the allegations against him are trivial, but rather that the gains he allegedly sought from Ukrainian President Volodymyr Zelensky seem meager when compared to the legal and reputational risks he and several of his adjutants appear to have taken.

A Ukrainian announcement of an investigation into dubious conspiracy theories involving the president’s political opponents was unlikely to deliver Trump much political benefit. However, the costs of pursuing that benefit are proving to be steep: history will record him as the third U.S. president to be impeached, the congressional proceedings and other investigations of his administration are revealing embarrassing information about him and his inner circle, and defending against the allegations (in public as well as the Senate) is consuming substantial resources that he and other Republicans could have devoted to the 2020 election cycle. It’s tempting to conclude that President Trump severely miscalculated in his benefit–cost analysis when he decided to get involved in Ukraine.

Yet, he has made similar apparent miscalculations in other matters. Whether Sharpie-gate or tweeting, or short-changing his small contractors, there’s a “C’mon, really?” quality to many of the scandals and embarrassments surrounding Trump’s administration and his business. This even extends to some of his closest advisers, such as Commerce Secretary Wilbur Ross’s swiping Sweet-n-Lo packets and alleged nickel-and-dime financial improprieties.

Adam J. Macleod, "Bagehot and the Causes of Our Crises" [January 2020]

The Alchemy of Happiness (Al Ghazali)

The Wealth of Nations: Book II, Chapter I

Of the Division of Stock

In the absence of either public virtue or a decent elite, the logic of Federalist 10 collapses. 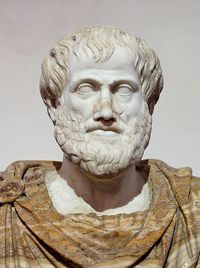 The Works and Correspondence of David Ricardo, Vol. 5 Speeches and Evidence (David Ricardo)

Speeches and Evidence contains the texts of Ricardo’s numerous speeches. It consists of his speeches given in the House of Commons and evidentiary advocacies before Parliamentary committees. The introduction provides insightful context to the circumstances and events that preceded Ricardo’s appointment as a Member of Parliament and describes his subsequent influence and role on various committees.

William Blake's Illustrations of the Book of Job

Related Links in the GSR: - Job

Book of Job. We include a number of his illustrations here and a full list.

Few observers and even few experts remember that the Organization of Petroleum Exporting Countries (OPEC) was created in response to the 1959 imposition of import quotas on crude oil and refined products by the United States. In 1959, the U.S. government established the Mandatory Oil Import Quota program (MOIP), which restricted the amount of imported crude oil and refined products allowed into the United States and gave preferential treatment to oil imports from Canada, Mexico, and, somewhat later, Venezuela. This partial exclusion of Persian Gulf oil from the U.S. market depressed prices for Middle Eastern oil; as a result, oil prices “posted” (paid to the selling nations) were reduced in February 1959 and August 1960.

The Lamp of Experience (Trevor Colbourn)

The Lamp of Experience: Whig History and the Intellectual Origins of the American Revolution (Indianapolis: Liberty Fund 1998).